Lesson 2 – The Benefits – Lowering Your Risk

It took me a while to add this chapter to the course. I knew the message I wanted to get across but not how to explain it. Then I had a bad day, one of those days where it’s just not happening, one of those days when you should just switch off and walk away. There’s no excuses necessary. You can put it down to lack of focus, being tired or just plain bad luck. Not that there’s any benefit in assigning cause. Let’s just say “stuff happens”.

Before we look at that day, let’s consider something. Here’s something we are often posed with as traders: 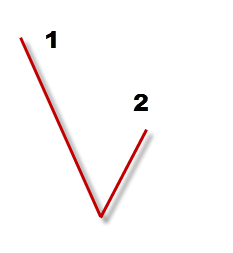 The market has moved down and is now moving up. Is this a pullback in a downtrend or is it a new uptrend? Let’s say that we think that right now, there is temporary resistance at point “2” and we think a down move is likely from here. In that case, we’ll be faced with one of the following outcomes… 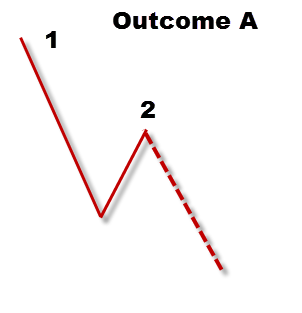 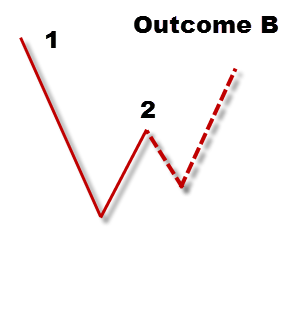 We all want to get into positions we can hold for a while. In this example, we are presuming the Tape/Order Book is showing us that the market can’t currently break above point 2. When that happens we go short. We do not wait for price to start moving down because then we enter in a much poorer position. The order flow will change before price starts to move in a different direction. If we end up with “Outcome A”, then that’s great, we have a trade that could run for us. If we end up with “Outcome B”, that’s OK, we get out when we see the market turn against us and we try again later. We might get a few ticks from Outcome B or we might get a scratch (break-even) trade. That is not to say we should close all trades at break-even, trades may move against us and still work out but let’s keep this simple for now.

Note that this is NOT picking tops and bottoms; it is entering with precision. It is seeing the change in order flow and then getting in before the price moves.

Of course, we could have “Outcome C” 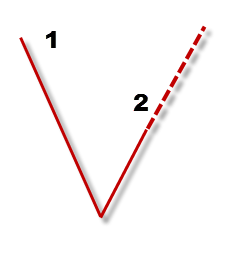 This will happen from time to time, if you are reading the order flow correctly, it should be the least frequent occurrence and you will know quickly that your premise for entering the trade is not holding up. The whole point of reading order flow is to get a good entry at a point where the trade will go your way quickly. This does not mean it will necessarily continue for an extended period of time but you should see the market go your way after the entry.

I made one very small profitable trade in the morning; this was followed by three trades where I read the market wrong. I then decided to stop trading but after 10 minutes I decided to go back “shake it off” and attack the market again. Then I made the 5th trade where I actually read the market right but I got shaken out, mostly because my mind was still on those 3 poor trades.

5 Trades, 1 that made money and 4 that didn’t. The total loss on the 4 trades that didn’t make money (before commissions) was $0. Even though those 4 trades didn’t go my way, they didn’t lose me any money. Of course, I paid commissions but the first trade covered that.

I use the Tape/Order Book it to both confirm a trade and more importantly to GET A GOOD PRICE. Once you can read the Tape/Order Book, you will be able to enter the market in a place where the trade is likely to go your way immediately. Of course, this doesn’t always happen but if you can get in at a good price, you can really minimize your risk on a trade.

Let’s have a look at my bad day. First, the trade list: 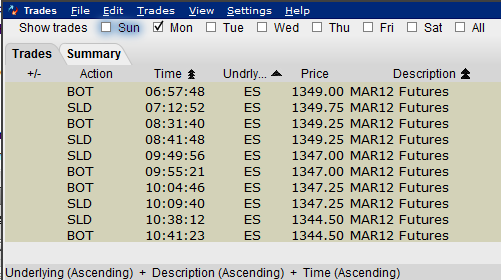 As we can see, the first trade was just a 3 tick profit and then every other trade was a break-even. Let’s look at the chart: 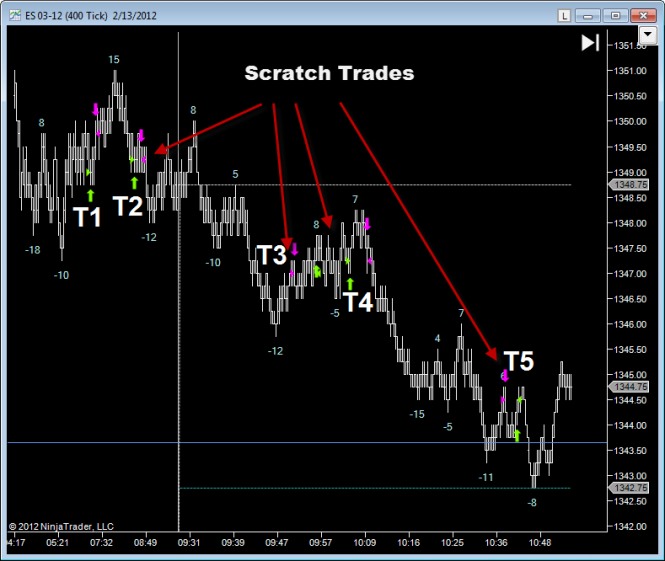 Now, let’s go through my pain, one trade at a time. We’ll look at the entry and the reason for the exit. 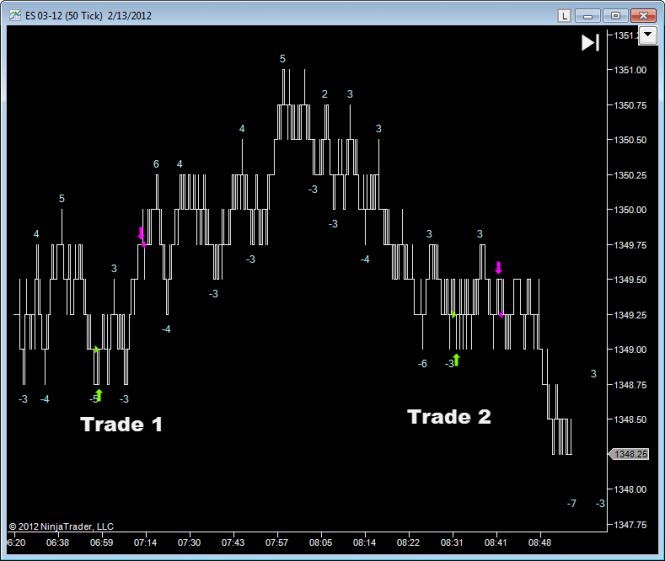 Trade 1 – The market was moving sideways and had been doing for over an hour. I had no overall bias up or down. Above at 1350, there was a seller showing a lot of size in the form of limit orders on the offer. I could also see that each time we came down to 1348.75, there was a lot of selling but it could not move the price down. I thought that the sell orders above were fake and that this ‘faker’ was the same person buying at 1348.75. I thought that the 1 hour of moving sideways would soon be over and that we would move up. I expected that when we approached 1350, those sellers limit orders would disappear and we’d move up.

In this case, we can see we went as low as inside bid 1348.75/inside offer 1349.00. A market sell order would be sold at 1348.75 and a market buy order would be bought at 1349. I bought and got 1349. The key here is that I bought 1 tick above the low. In fact, this is really the best price you could buy at. You could try to put in a buy limit order at 1348.75 but your chances of getting filled there are slim. For now, trust me that buying 1 tick above a swing low is the best price you can realistically trade at.

On this trade, price moved up to 1350 and the offers (sellers) there didn’t disappear. I closed the trade on that basis and whilst it did go higher, I did the right thing at the time, considering my reasons for entering.

Trade 2 – After exiting Trade 1, we put in a good move up. My expectation was that we’d move back down a little and then start to move back up again. From 1351 down to 1349, I was waiting for the Tape/Order Book to tell me that the move down was over. Here is what I saw when we came down to 1349. 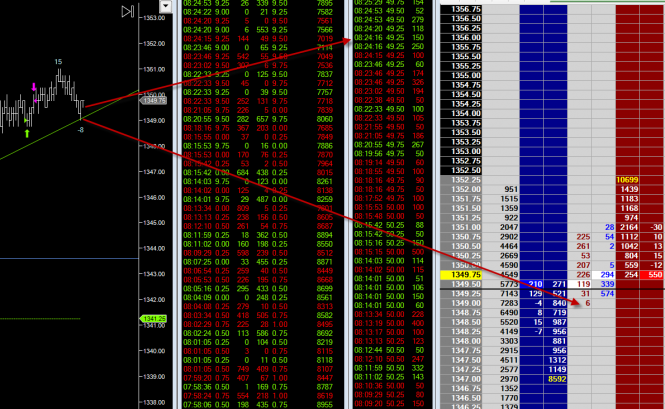 We came down to 1349 and only 6 contracts traded there. We also had the some large traders come in and push the price up to 1349.75. At this point, I am thinking that 1349 was a new swing low. I am also thinking that I missed the best price to get in. I am VERY tempted to buy 1349.75 but I’d be chasing the trade if I did that. Sure, I want to get 2 or 3 points out of the trade but I really want to get a good entry price. A few minutes later, price come back to 1349 and that price is held so I got in at the inside offer price 1349.25. Price moved back up to 1349.75 again but there the buying faded. I saw sellers jump on board and I scratched the trade. At this point the order flow was definitely to the down side.

My premise for this trade was wrong, my overall read of the market was wrong but I got in at a good price and so my risk was low. You could ask “why didn’t you reverse when you saw the sellers jump in”. My only answer is “I was having a bad day”… 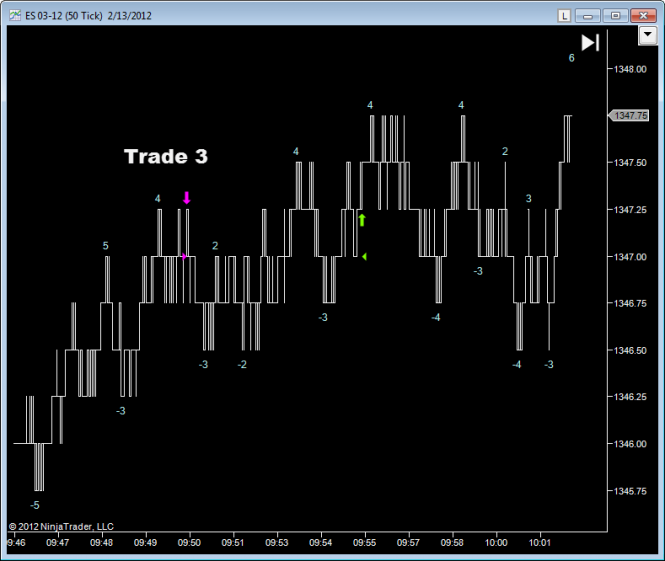 Trade 3 – At this point, price had moved down from the high of 1351 down to 1345.75 The last pullback was 5 ticks and we have now pulled back 6 ticks. I’m presuming this pullback is not a new uptrend and I’m looking for a place to get short for a continuation down. We were at 1347 bid and 1347.25 offered. I put in a market order to sell and got the bid price, the market co-operated by moving down 2 ticks. Then market moved back up, through my entry point and moved against me 2 ticks. I was not worried at this point. Trades often move against you. When it moved down again, I was expecting it to carry on down but there was no selling pressure and the order flow was telling me that a move down was now unlikely. I then put in a limit order to scratch the trade. 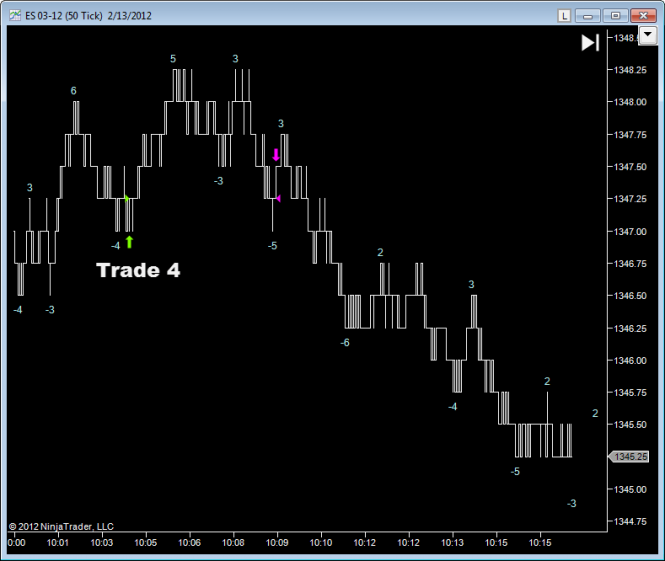 Trade 4 – At this point, I no longer have a bias. Based on trade 3, I think that a move up is just as likely as a move down. I’d normally should just stand aside and let the market play out. When the price came down to 1347, it was fairly clear that the bidders were absorbing all of the selling. Inside bid was 1347 and inside offer was 1347.25. I put in a market order to buy and price very quickly moved up, as expected. There’s not much to say about the exit other than price came right back down again. This time there was real selling pressure and I decided not to give the trade any breathing room and I got out at break-even again.

By now, I am a bit disappointed with my performance. As such, I decided to quit for the day, I switched off the screens and went down for a glass of water and to relax. After 10 minutes I decided to give it another shot…

Trade 5 – We’ve moved down from 1351 to 1343.50 and we’ve pulled back up to 1344.75. We have the overnight low (blue dotted line) below at 1342.75. The last retraces where 5-8 ticks and we’ve pulled back 6 ticks. The buyers are rapidly disappearing. At this point the inside bid is 1344.50 and the inside offer is 1344.75. I put in a market order to sell and I get the inside bid price of 1344.50. Price moves down as expected and then moves back up. My exit here was pretty dumb. This is a trade that deserved some breathing room but the prior scratch trades had me in a state where I was expecting the market to move against me. I got out a break-even and then really did finish for the day.

So, not an awe inspiring day. Still, the entries were good and I didn’t lose money. In each case, the price I got was a very good price and the market did initially move my way. As I mentioned, this is NOT catching the top and bottom of the market. This is getting a good price and reducing your risk.

I cannot imagine using only a chart to enter a Day Trade. Based on a chart alone, I can’t see how you’d get such refined entries and such low risk. The order flow gives you a signal long before anything is visible on the chart. This is the benefit of Tape Reading/Order Book Analysis.

That’s the end of Lesson 2. Click Here to go back to the lesson plan.

Futures and forex trading contains substantial risk and is not for every investor. An investor could potentially lose all or more than the initial investment. Risk capital is money that can be lost without jeopardizing ones’ financial security or life style. Only risk capital should be used for trading and only those with sufficient risk capital should consider trading. Past performance is not necessarily indicative of future results.

Testimonials appearing on this website may not be representative of other clients or customers and is not a guarantee of future performance or success.

The following is a mandatory disclaimer for SIM Trading results: